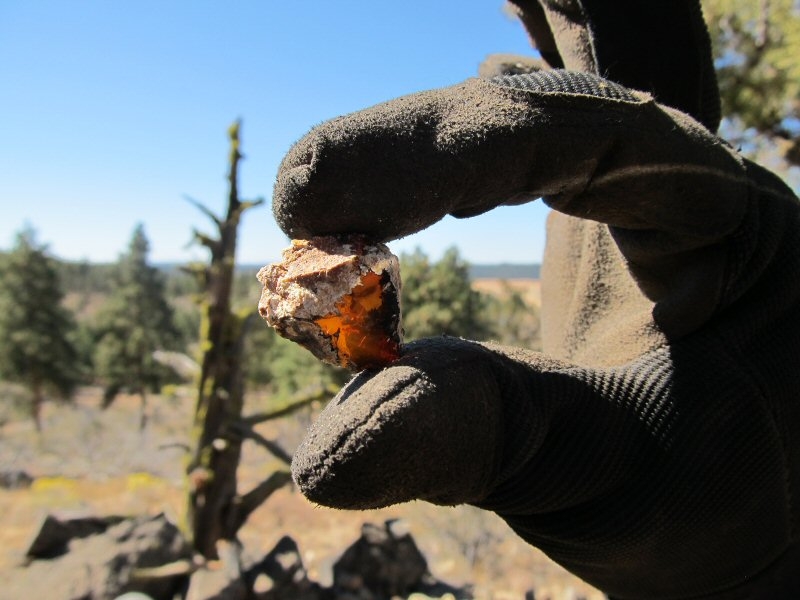 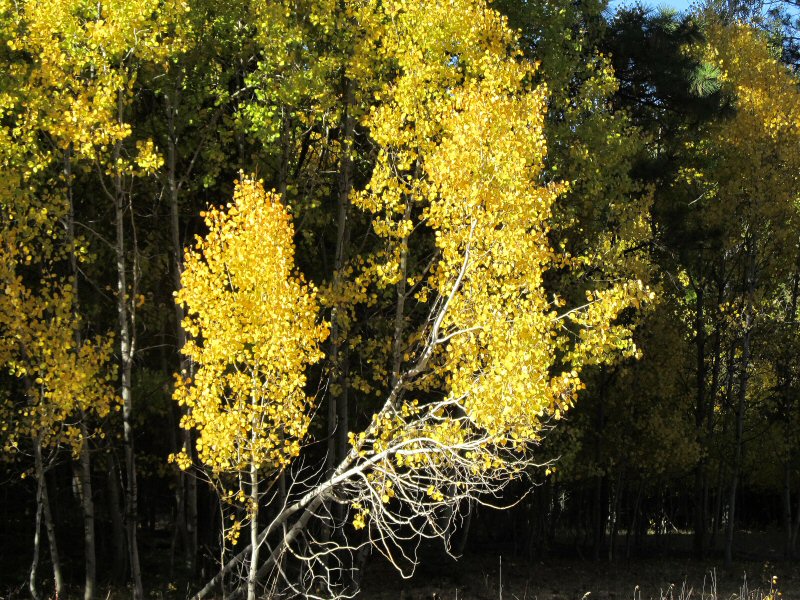 My friends, and lapidary artists Dan and Cyndi Wolke, of the Vallejo, California Gem and Mineral Society invited me out on a beautiful Fall day in late September. Jamie Lant, fire opal claim owner on Juniper Mountain, in Lake County, Oregon had posted an open invite on Facebook for anyone and everyone to come out and dig the gemmy red-orange opal found on his claim. 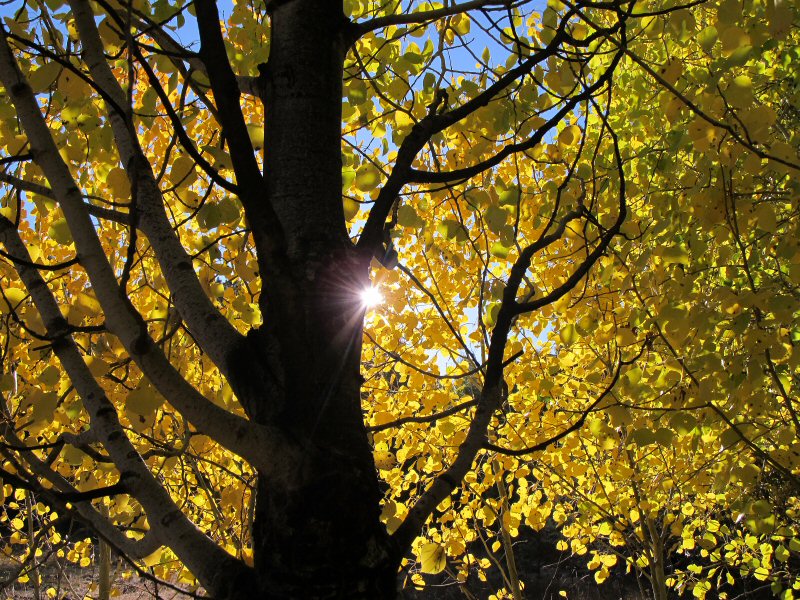 The morning of the dig day came bright and gorgeous as the sun rose along lines of glowing gold quaking aspens near the Oregon Highway 140 Quartz Mountain Pass access road to the mining claim. 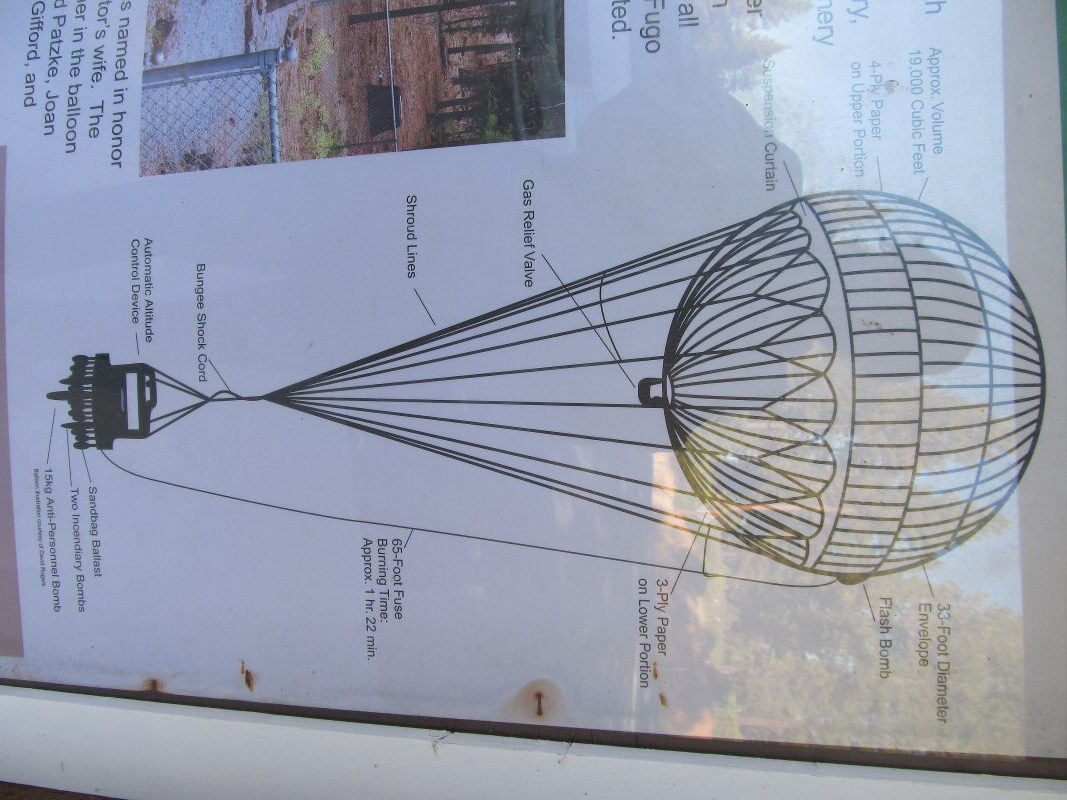 An interesting and chilling historical note: On May 5th, 1945, a Reverend named Archie Mitchell, his wife and five Sunday school students arrived at nearby Leonard Creek for a fishing trip. The wife and children set out to explore the creek as Archie parked the car. Upon turning off the engine, Archie heard his wife call to him to look at what they had found. He saw the group huddled around some foreign object, and observed one of the children reach for it. At that moment an explosion ripped through the serene air of the morning, and Archie Mitchell was the sole survivor. This group were the only civilian casualties of World War II within the continental United States. The Japanese balloon boming campaign aimed to start mass fires and cause panic and terror on the West Coast. Out of 10,000 balloons launched, only 300 found their way to the USA, and most detonated over remote areas. The mission was ultimately a failure. 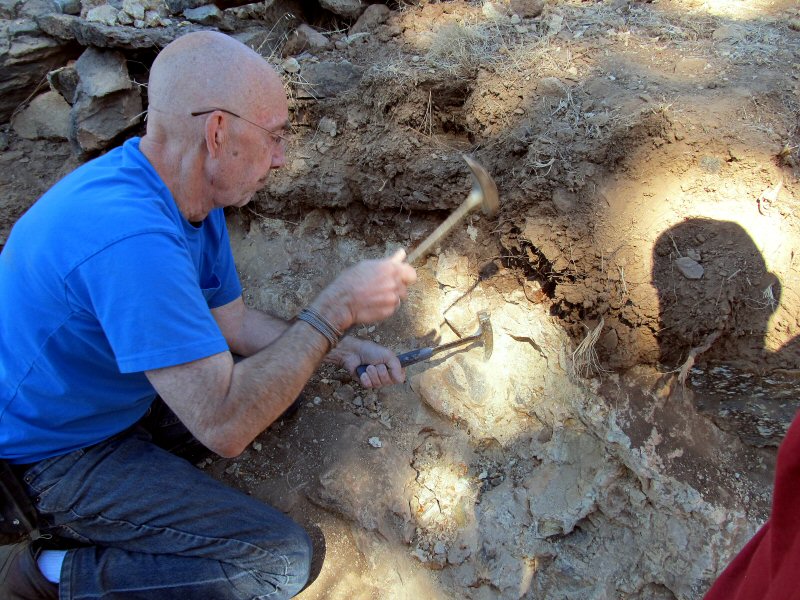 Also with our group is Lloyd Braunberger, a gemologist from Brownsville, Oregon. Here Lloyd uses two rock picks to remove matrix rock from a fluffy layer that is showing a tantalizing little glint of color here and there. 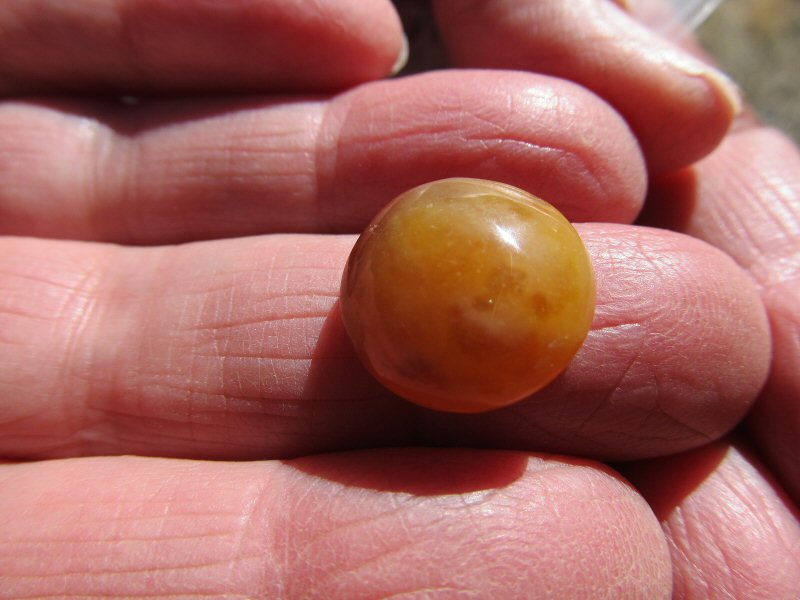 Here’s a cabochon made by Erin Dana Balzrette of Tree Climbers Stones, from a piece Lloyd collected on an earlier trip to the claim. 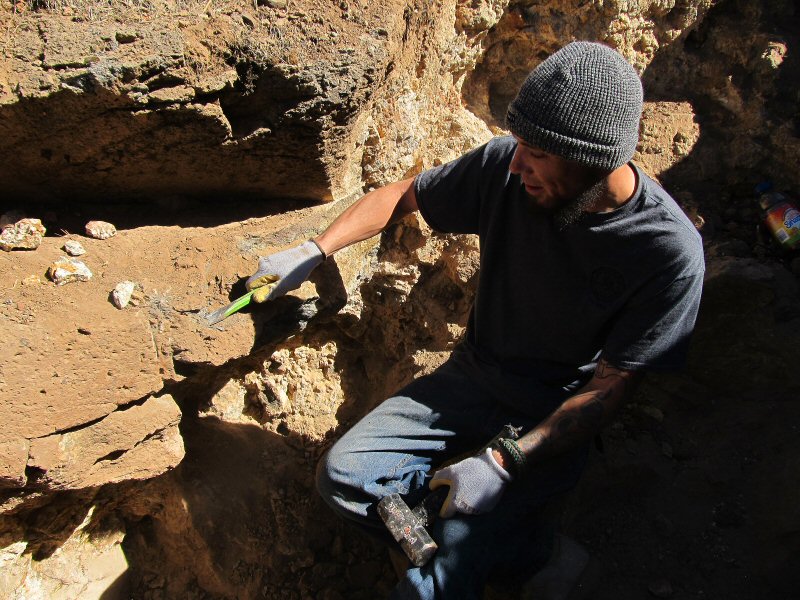 Soon we are joined by the claim owner, Jamie Lant, a generous and open hearted individual who feels that it is important to allow opportunities for rockhounds in an area that has mostly been closed to public digging in the last five years. But Jamie must balance grace with practicality. His concern is that nobody gets injured on the claim, or causes an issue that would endanger or upset neighboring claim owners. Upon arriving at his claim, he immediately starts breaking rock. But he’s not digging for opal at the moment. He’s trying to make the pit a little safer by removing overhanging rock that was somewhat dangerously undercut by previous diggers. 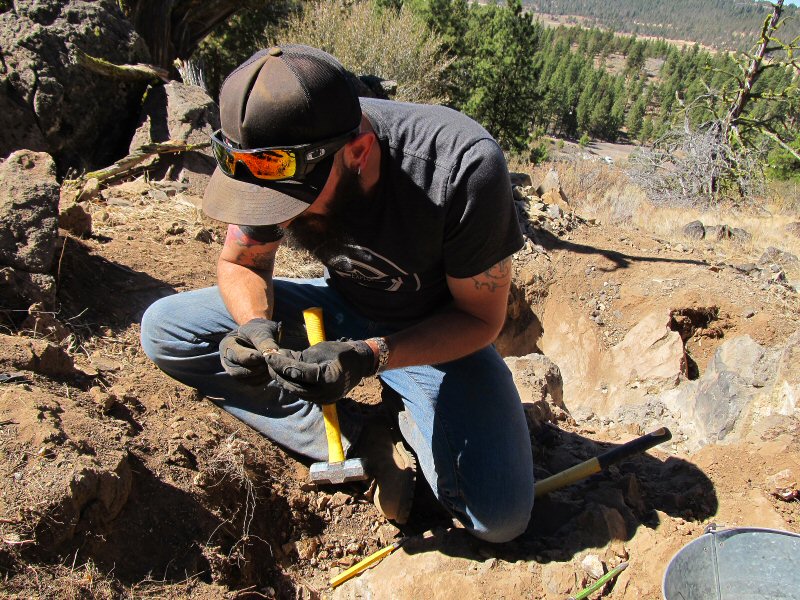 Jamie’s friend Ian also joins us and begins work in a smaller pit below the main dig. When asked how they decided to locate the pit at this exact spot on the claim, Ian replies that he stumbled on it. He means this literally. Apparently while they were out one day hiking the claim, Ian tripped and fell. When he landed, he noticed that he had fallen right by a seam of fire opal that was outcropping on the surface of the ground! 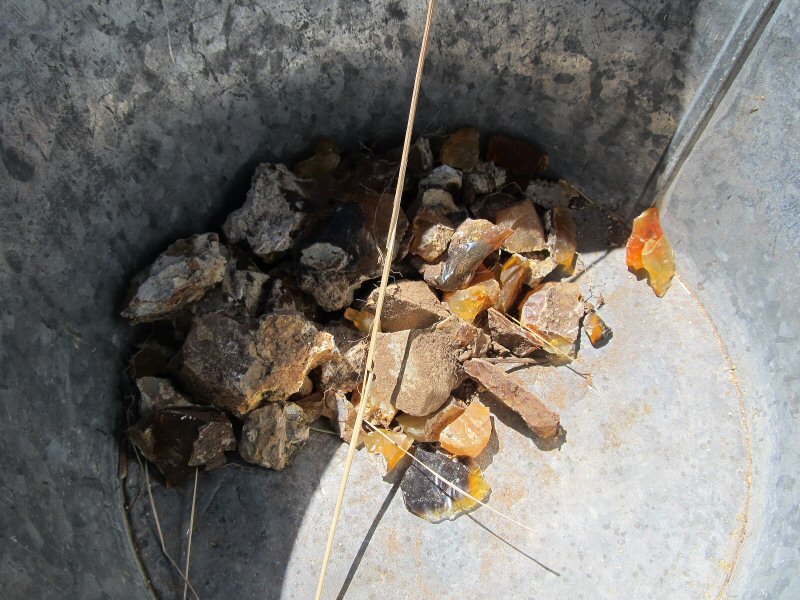 Today, Ian works away at that same seam, as it is diving down into tight rock. He fills his bucket with chip after chip of beautiful honey-amber colored opal. 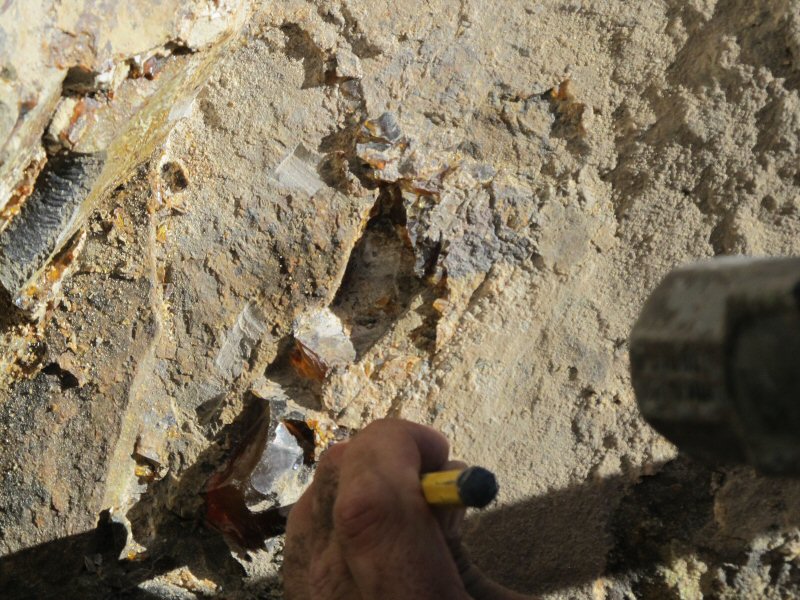 Here’s a miner’s eye view of the seam that Ian is working on. It tumbled out lots of opal, from tiny chips to nice nuggets several inches in size. 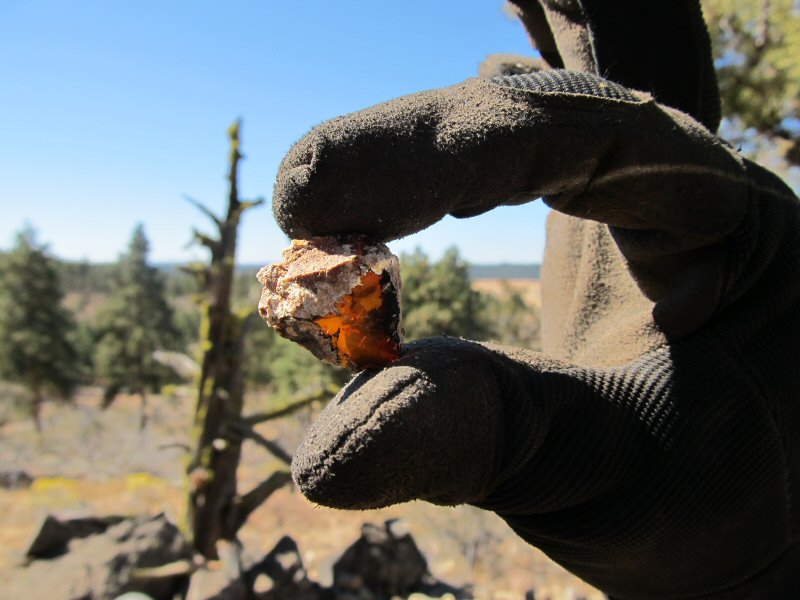 The true beauty of the opal is quite noticeable when it is backlit with a strong source of light. It’s like looking out under richly colored amber water. 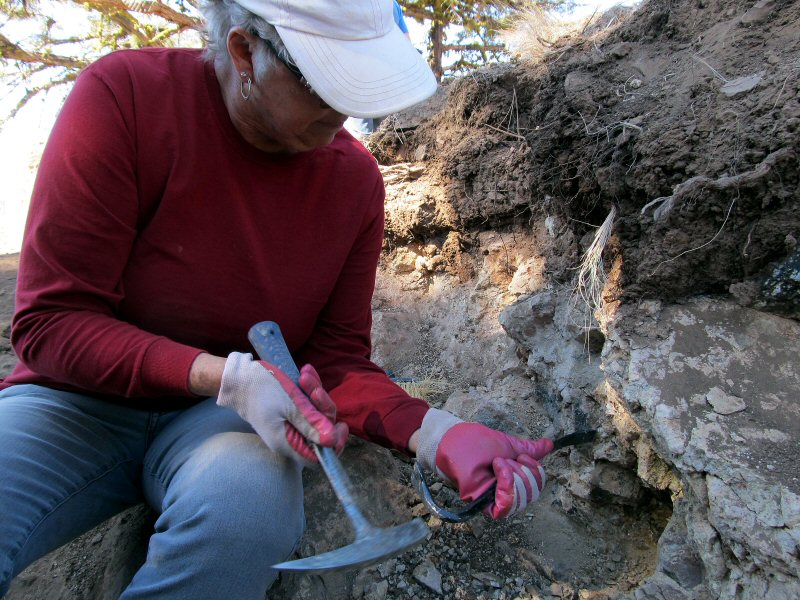 Meanwhile, Cyndi starts working at that tantalizing soft rock zone in the main pit. It keeps seeming to promise something. 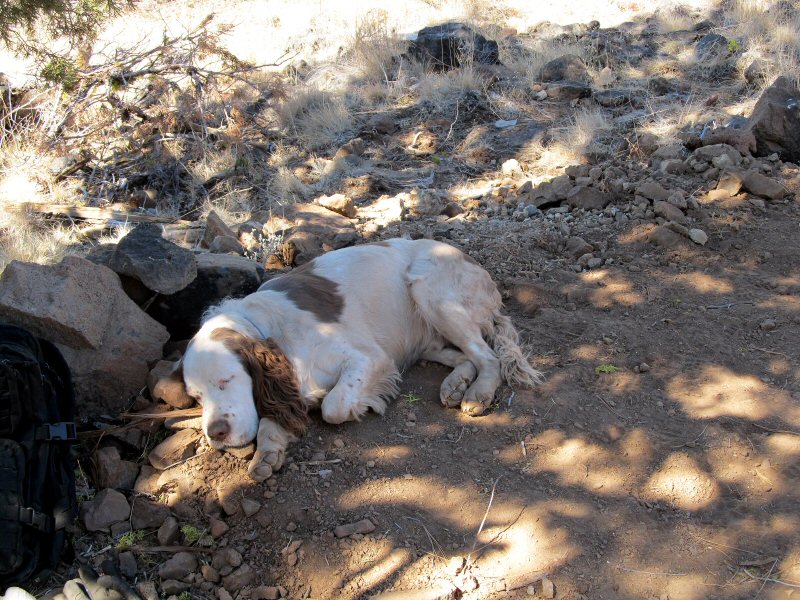 At some point as the temperature climbs, the Wolke’s dog, Levi, gives up. He figures he’s had enough of opal mining! 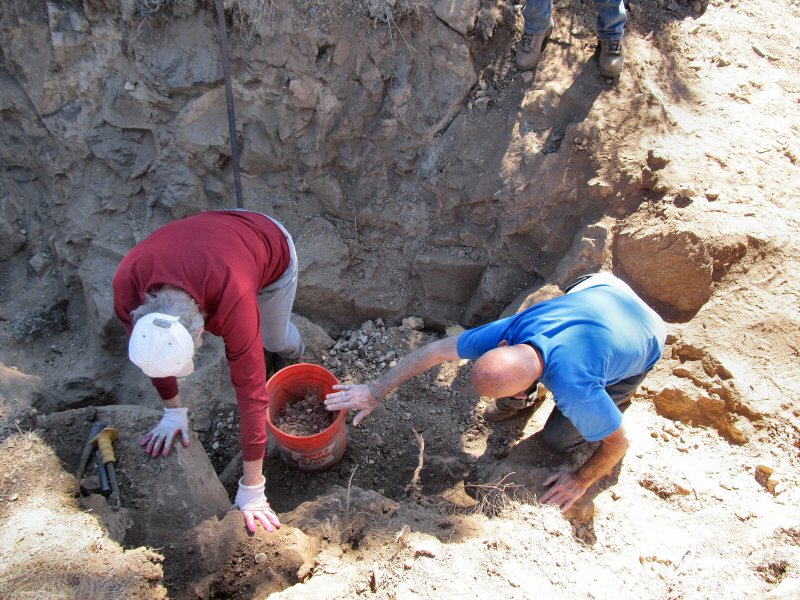 Lloyd and Cyndi muck the pit. An important part of rockhounding etiquette when you are working at a shared dig site, is to try to keep the area safe, and the dig neat for the next person. This means removing your tailings from the pit periodically so that the enlargement of the dig can keep taking place in an efficient way. 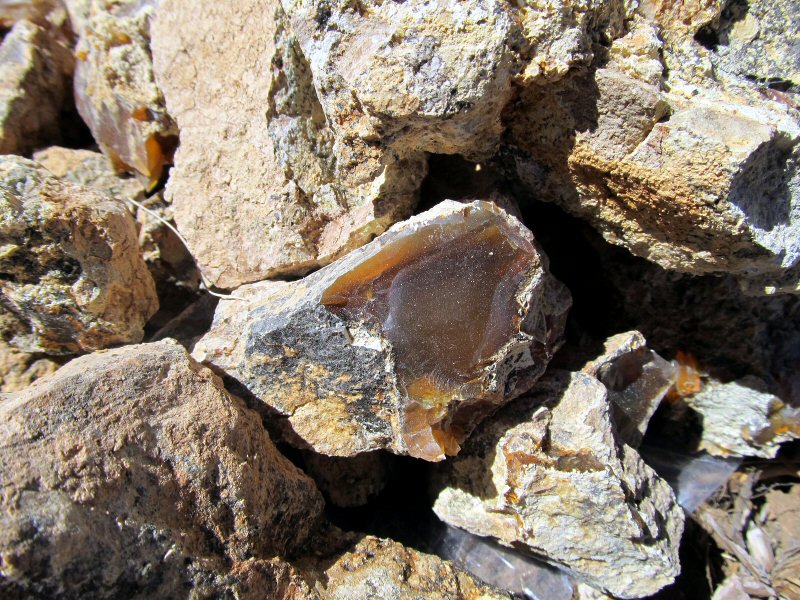 At some point, that old tantalizing zone in the main pit that had been yielding tiny chips, begins to get hot and yields up some larger nuggets of yummy Juniper Mountain opal. The main piece in this picture is a little over 3 inches long! That’s a good sized opal. 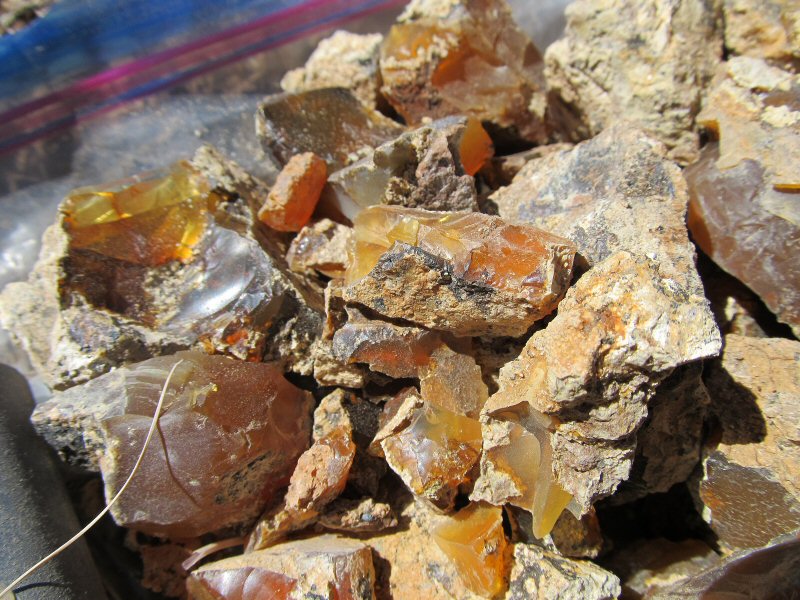 Chunk after chunk comes out. At times there are  four or five larger chunks showing, with a network of thin glassy opal seams threading back and forth between them. The opal pile grows big, and we get some interesting matrix pieces too where remains of an opal seam still cling to the host rock. 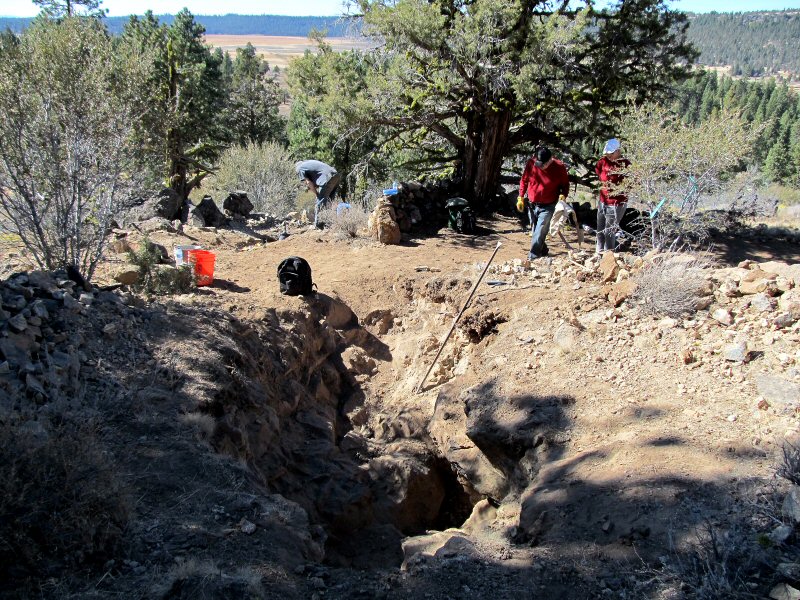 The pit at the Red October claim has been productive. Our rockhound group has done very well, and everybody is happy. We enjoyed sharing the good company of the claim owners and the camaraderie of digging in a beautiful and unspoiled location. A big thank you to Jamie Lant and Ian for keeping this resource open for the general public! 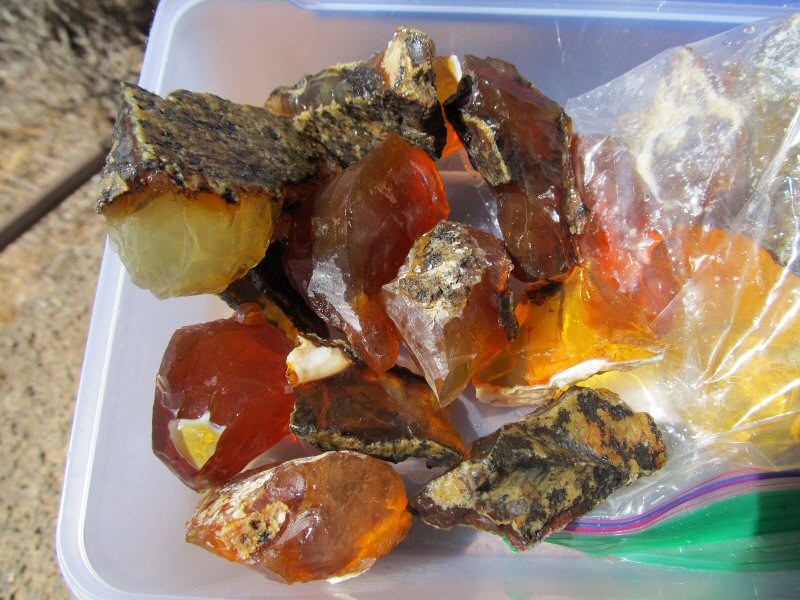 Jamie and Ian show us some opals that they have dug recently! They have opal for sale and you can find Jamie Lant on Facebook for more information on purchasing some of this attractive, gemmy fire opal. 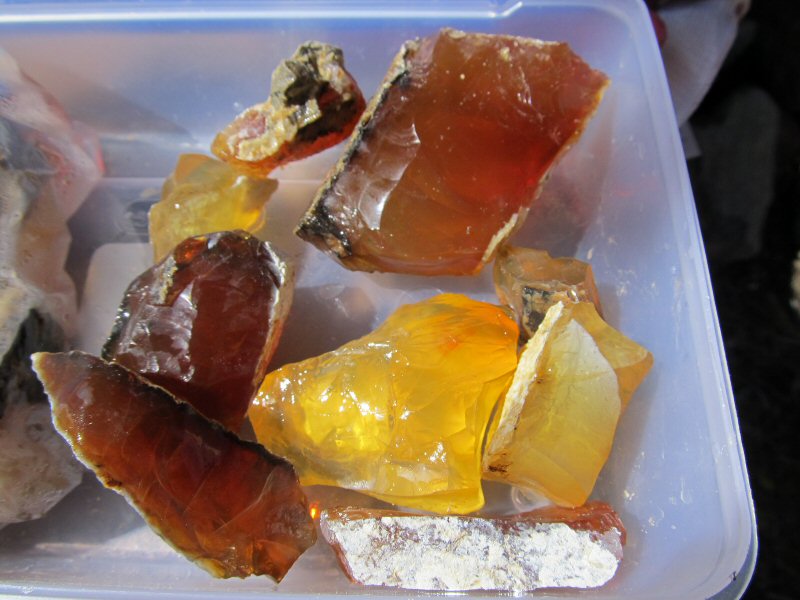 This material popped out of the same seams that we were digging on. 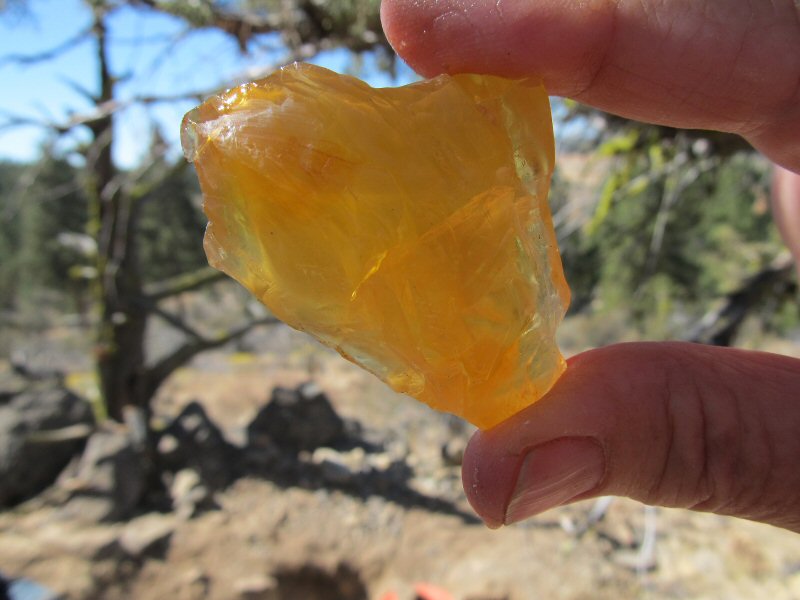 The opal ranges in color and clarity. There is butterscotch yellow such as this giant piece. 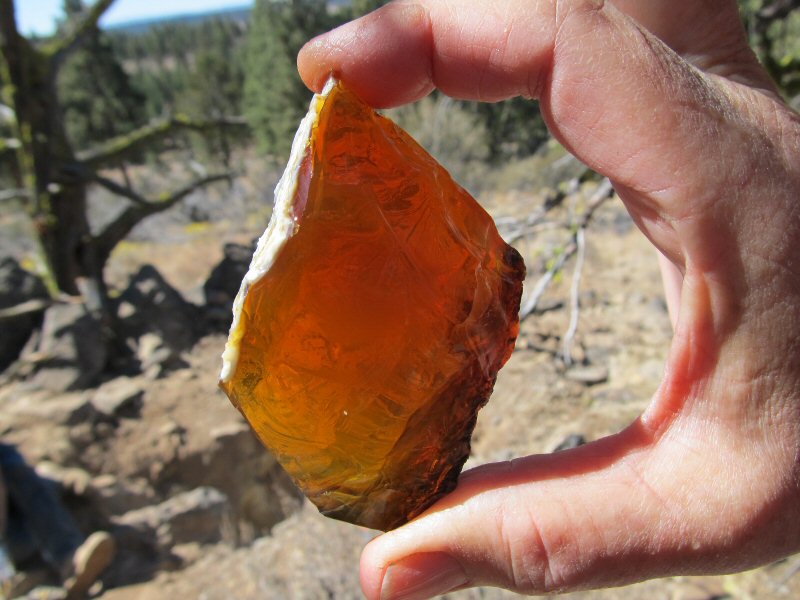 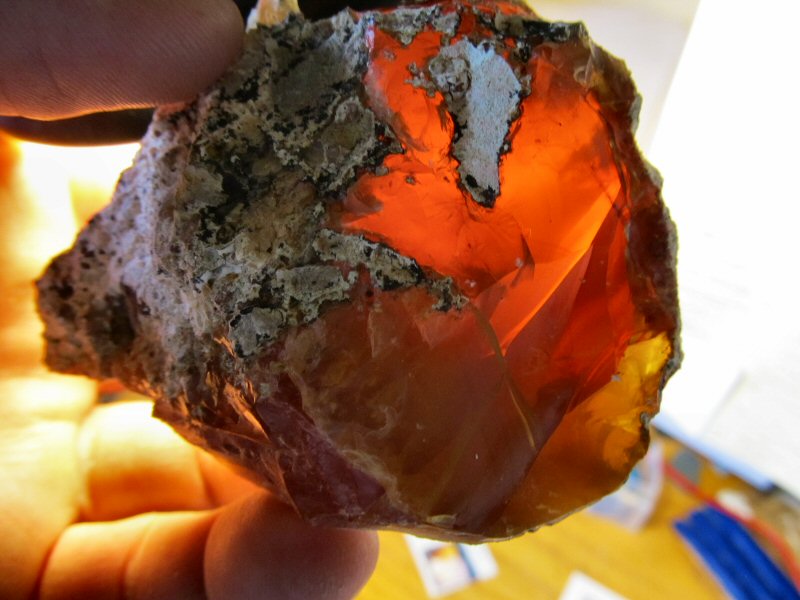 Here’s one I dug, backlit. It’s hard to show the true beauty and depth of these opals in photos. Your have to see them with your own eyes. 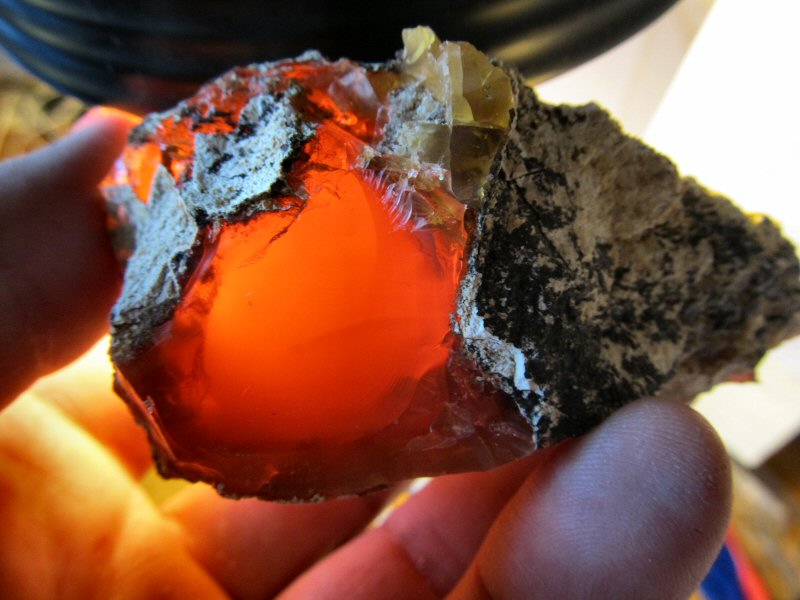 The Juniper Mountain opals remind me of the dioramas of my childhood days. You are drawn inside through a portal, into another world. 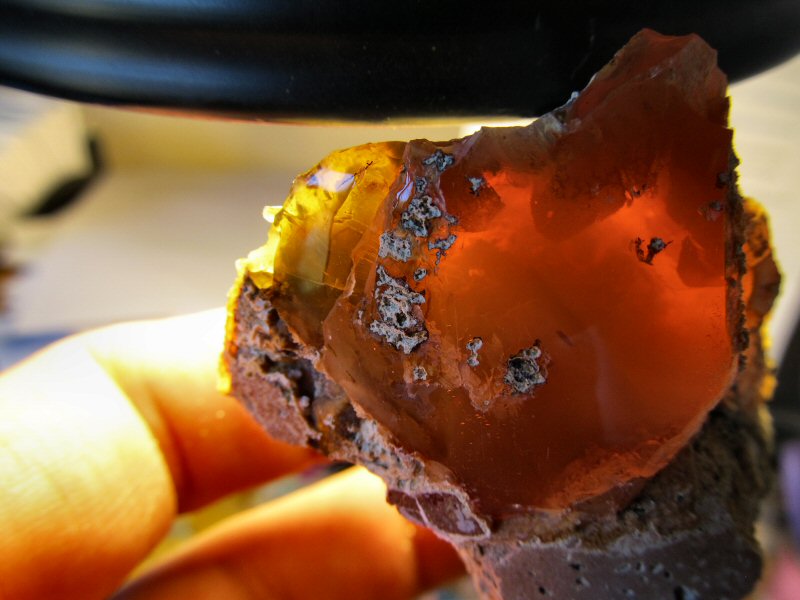 It hard to get tired of looking at these. 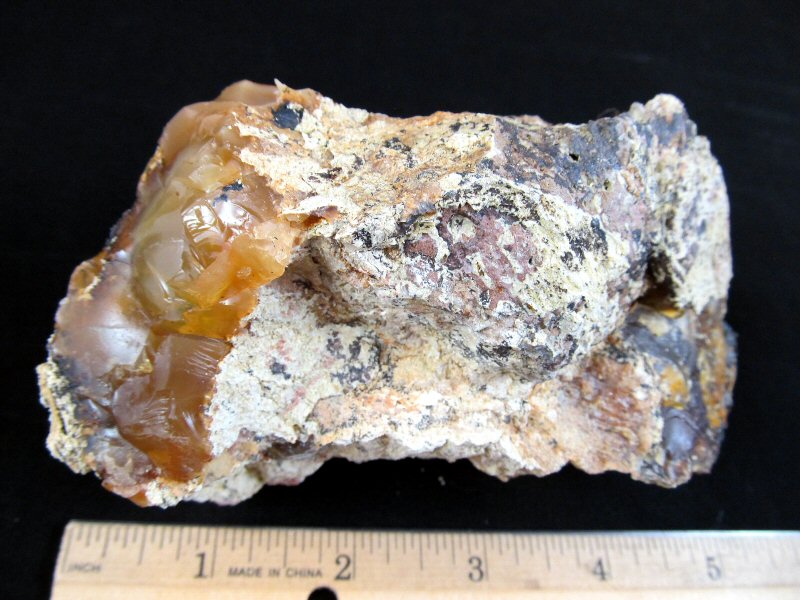 Here’s a chunk of the host rhyolite with a large, yummy caramel colored opal at one end. You have to look close when you are digging. The discerning eye will notice that there’s another opal on the other end of this piece, doing its best to hide! 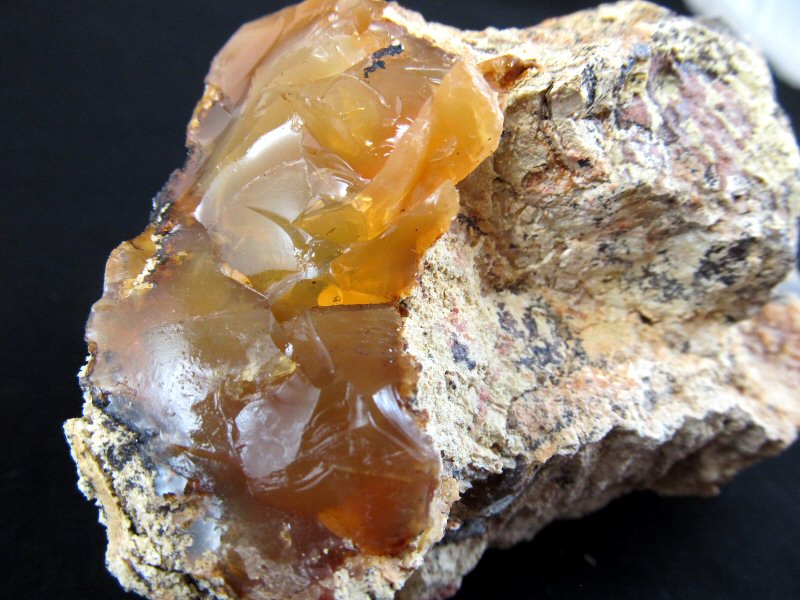 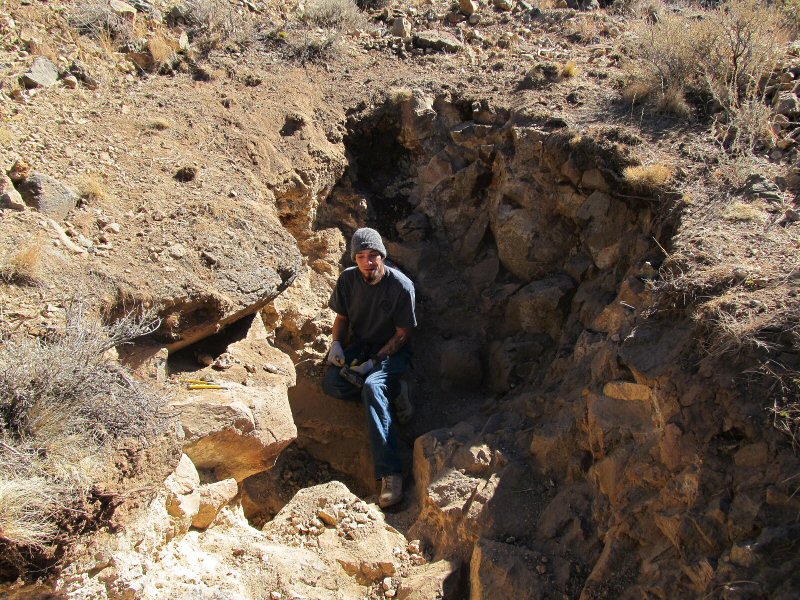 Back at his claim, Jamie seems to contemplate the game plan for the future. It’s a bold move to invite people you have never met onto your claim to dig. The Red October claim is located in the middle of a slew of claims, and some of the other claim owners are secretive and protective. Claim boundaries are not always apparent, and visitors to the area need to be aware not to trespass. Will everybody who comes here be respectful or safe, even if they don’t know Jamie or any of the claim owners? To top it off, there’s an extended and ever present severe wildfire danger in Southern Oregon. Keeping this dig open to rockhounds will require everybody to be cooperative in endeavoring to make this dig as successful as possible. Catch Jamie Lant on his facebook page for questions and directions to the claim. Best of luck in the field!