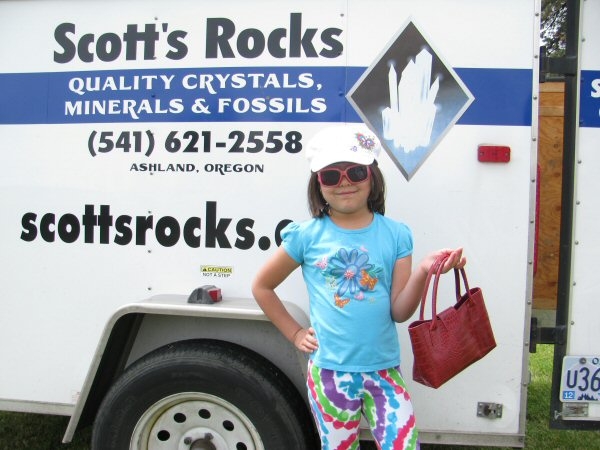 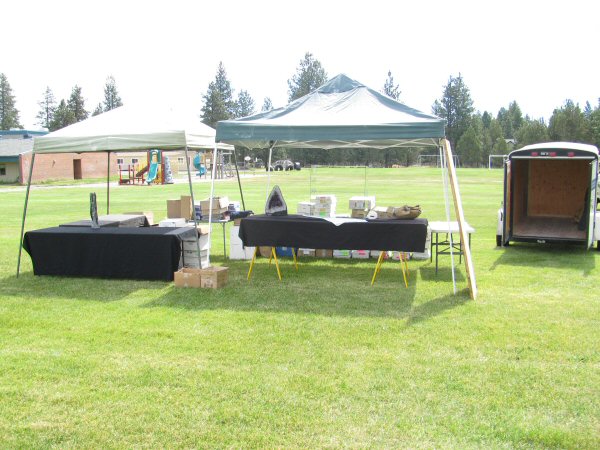 First, there is only an empty field. Then a bunch of people converge, and adorn the place with rocks. If we were painters, we’d be called artists! 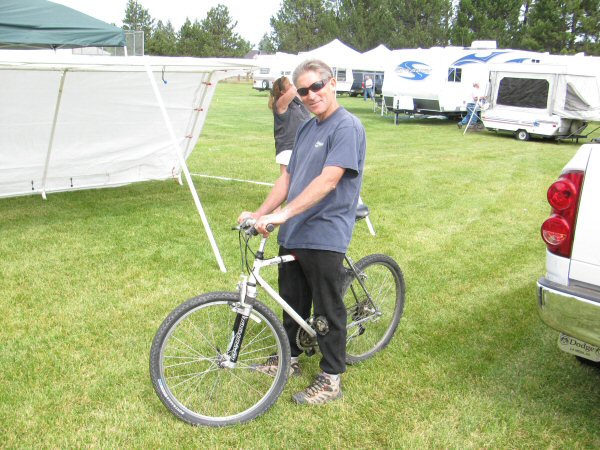 What’s Wrong With This Picture?

It was cold for the 4th of July. Dealer Jack Daggett, in a rare sighting – with long pants on! 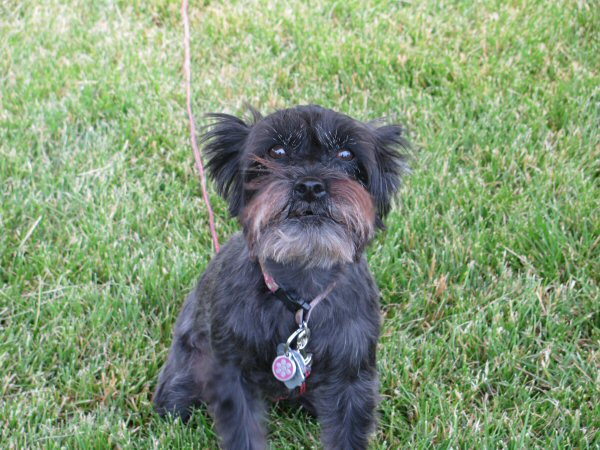 You Will Play With Me!

Feeling abandoned during setup, Scott & Cindy’s pooch decides to use its hypnotic powers to find love. 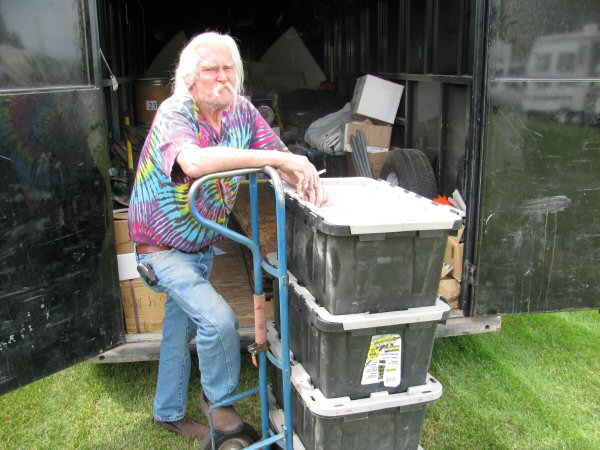 Dealer Bill has sold so much green onyx over the years, that some folks call the material “Billite”. 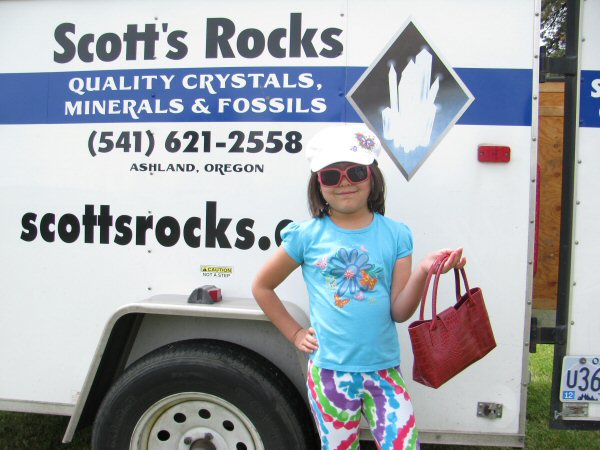 Gaia Faas, daughter of Jade dealers Abram & Sho-Ju, uses her precocious powers of pep to whip my booth into shape. 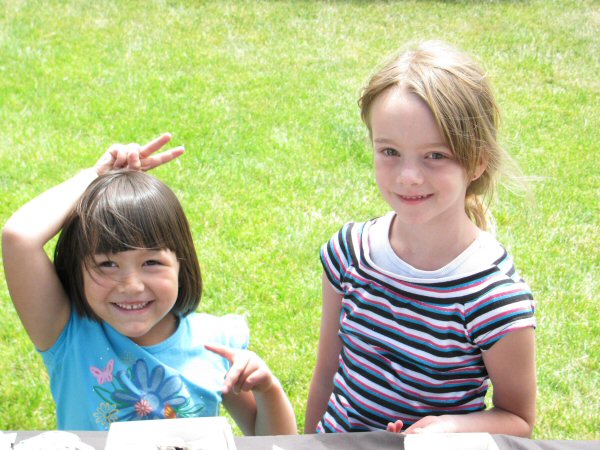 My helper trains another helper, thereby creating a supervisory position for herself. 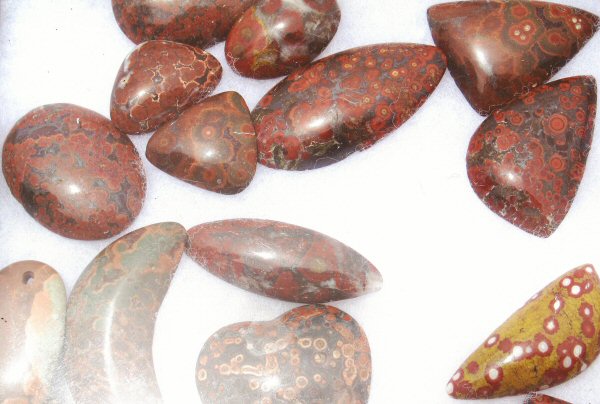 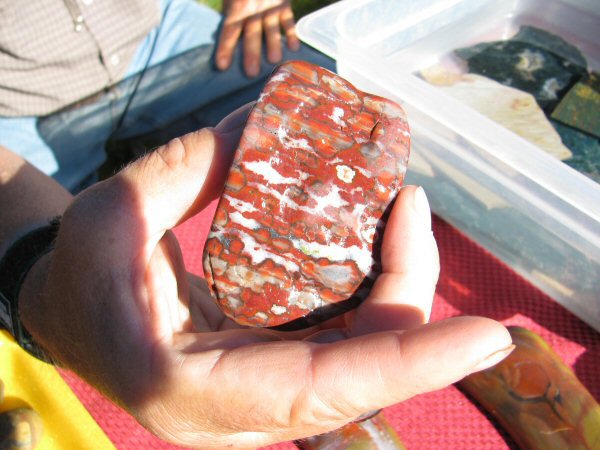 Jack Daggett produces a small piece of an interesting type of poppy jasper, from an area near Morgan Hill, California. Mike, aka “Rooster”, of Rooster’s Rocks, out of Newport, Oregon, buys immediately for $10. 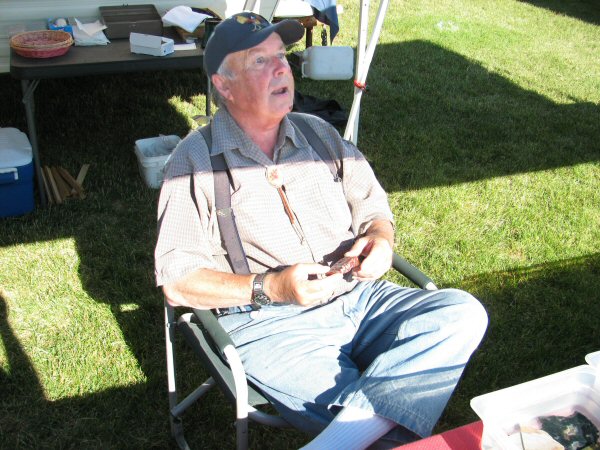 Rooster, holding his newly acquired piece of poppy jasper, speaks about how he will cut a pendant, and matched set of earrings from his purchase. Mike’s lapidary skill encompasses the older values of an earlier guild. He still carries the tradition that skill and excellence are more important than how fast you can make it, and how much money you can get for it. He says the general pubic will not necessarily notice that the earrings he cut will be perfectly matched, but to him, it’s very important 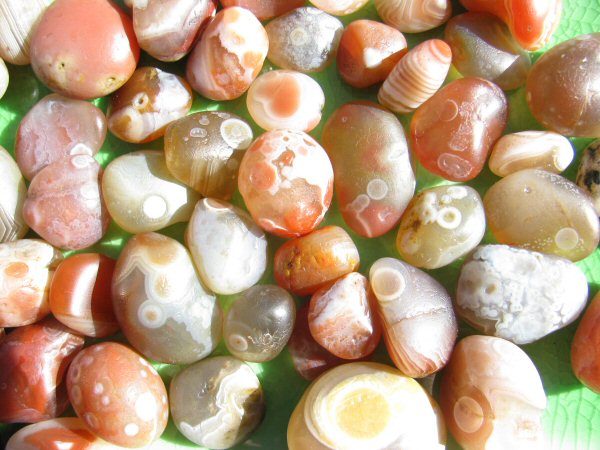 Remember that childhood story about Ping, the little duck who lived on the wise-eyed boat on the Yangtze River? Well, those are the rocks that duck was swimming over! 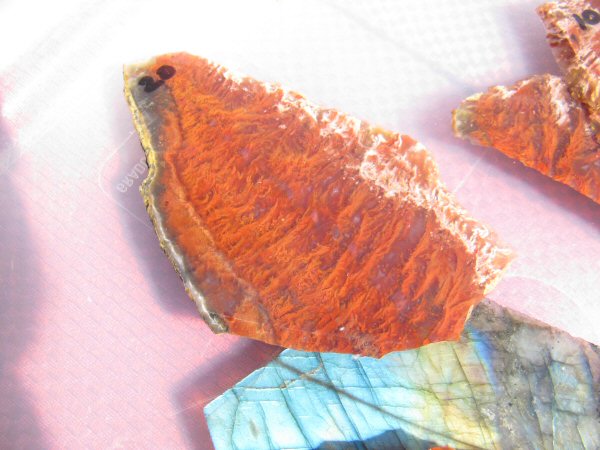 Some Agates Really Are “One-Of-A-Kind”.

A dealer displays an absolutely gorgeous piece of “flame” agate. He explains that he only had one rock, which he slabbed up into a few pieces, and when they’re gone, they’re gone. Although there are some colorful and scenic agates that enjoyed larger productions, such as Regency Rose Plume Agate, or the famous Laguna Agate, out of Mexico; rockhounds covet the rare and unusual singular agates that may have had no real production to speak of – only a few pieces picked up by hand. 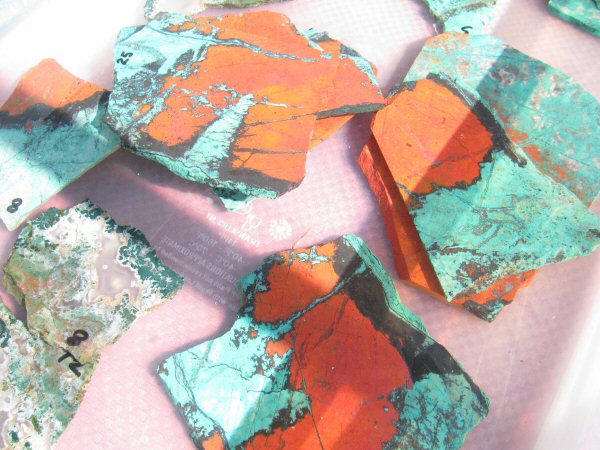 Sonoran Sunset, out of Mexico. 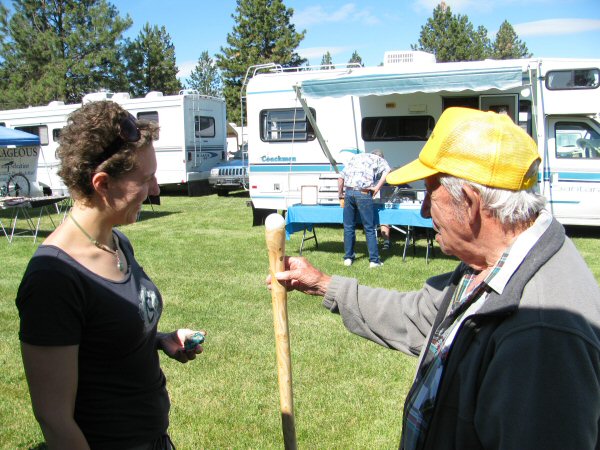 He explains that it is made from the sanded trunk of a Christmas tree, and topped with a sphere of what he calls “gir” opal. Girasol opal is defined as, “a translucent mineral consisting of hydrated silica of variable color.” I’ll have to confess, I’m suspicious that the sphere might actually be “opalite” glass, manufactured in China, but sometimes it’s best to just keep my mouth shut. Especially with the boss. (*wink*) 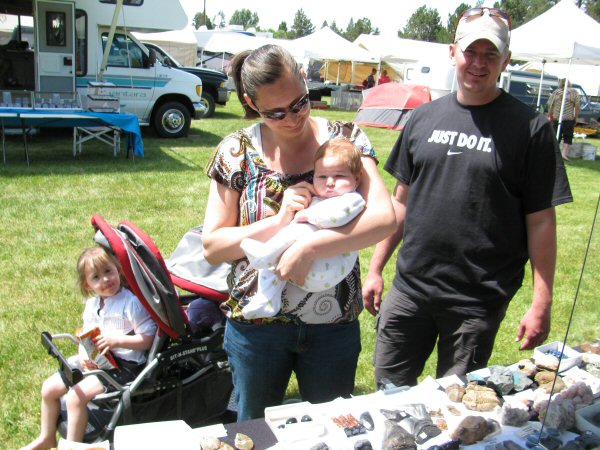 Gem Shows Are For The Whole Family. 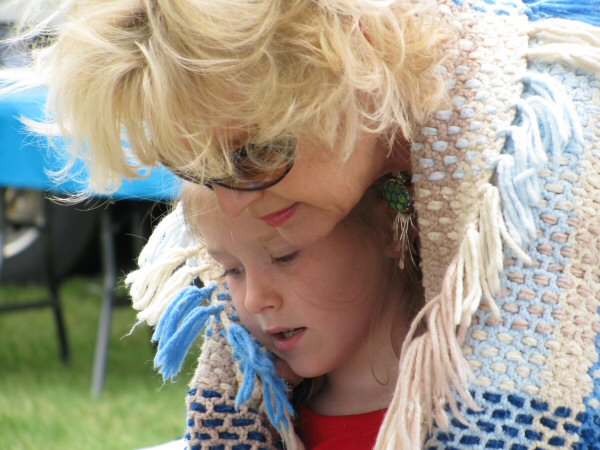 The Weather Was A Little Bit Frightful.

Here a grandmother wraps her shawl around her granddaughter as cold winds chill the gem show. Over at the concurrent Madras show, about 30 miles away, we hear that the winds have picked up a dealer’s canopy and sent it whirling 30 feet in the air! Thankfully, nobody was hurt, and all the rocks were recovered. Dealers refer to occurrences like this as “the tornado of gems”. 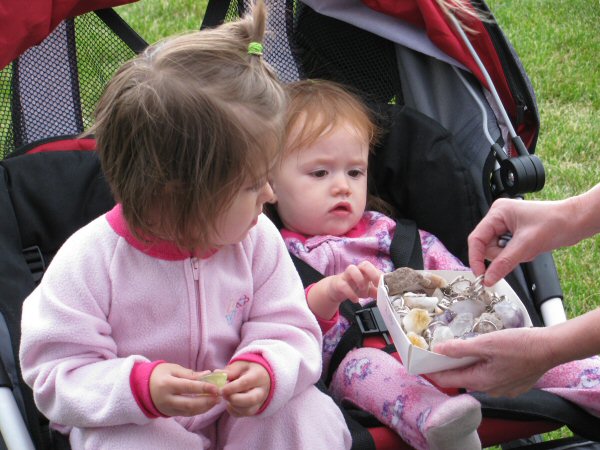 Little sister gets to pick out a gemstone keychain. For many young children, gem shows may be their earliest introduction to the amazing world of rocks and minerals. I hope that the children’s almost intrinsic love of stones is able to increase, and that it leads them down a beautiful pathway in their life, as it has for me